The Law Offices of James E. Crawford, Jr. and Associates, LLC takes helping clients seriously. That’s why every lead gets a free consultation call with a lawyer. However, those calls stack up over time. It’s easy to lose track of leads as cases move between hands.

The situation: Too many leads that weren’t leads

JC Law used a CRM which couldn’t bring them to their max potential. It didn’t sync up with any of their lead sources, and dumped all paid leads into a central email account. Their lawyers manually checked to see which potential clients had been contacted at all — let alone followed up with — and counted leads by number of emails.

However, that system could count the same lead multiple times, as multiple emails arrived for the same lead. For example, seven calls from a single lead would result in seven emails, and each counted as a “new” lead. This inefficiency led to inflated metrics and wasteful ad spend. And, their previous CRM registered all calls as paid leads, but anything to the main line during the day as organic.

Needless to say, the data was hopelessly skewed and muddled.

The solution: Filling the attribution gap by integrating Hubspot and CallRail

When Ashley joined JC Law as their Media Director in April 2020, she turned to new vendor HubSpot and old partner CallRail for help.

“In order to get more clients, you can either brute force more people to look at you through external advertising, or better refine the conversion process to make better use of who you get now,” Ashley explains. “At the start, I couldn’t tell you either of those things — how many people were coming in, and how many of those people actually became clients. And then, I needed to know where they were coming from in the first place!”

“That’s why I love the two of them together — CallRail and Hubspot,” she adds. “I would highly recommend getting CallRail with a Hubspot app if you need to know call attribution, organic or paid.”

For example, JC Law advertises their services in part through PPC advertising on Google. By analyzing the actual calls that came through on CallRail with website traffic analytics and converted contacts in Hubspot, Ashley discovered JC Law’s June 2020 CPM was $790. That’s $0.79 for a single view of their paid ads.

(For reference, average CPMs usually range from $3.00 to $9.50, depending on the platform and industry.)

Based on this report and other findings, the firm’s new proposed marketing budget decreases annual marketing spend by 20% while maintaining and improving previous new client counts. “Because CallRail gave me the campaign attribution to match up with the Hubspot contacts, I can optimize my ad spend and get 100 times the ROI,” Ashley says. 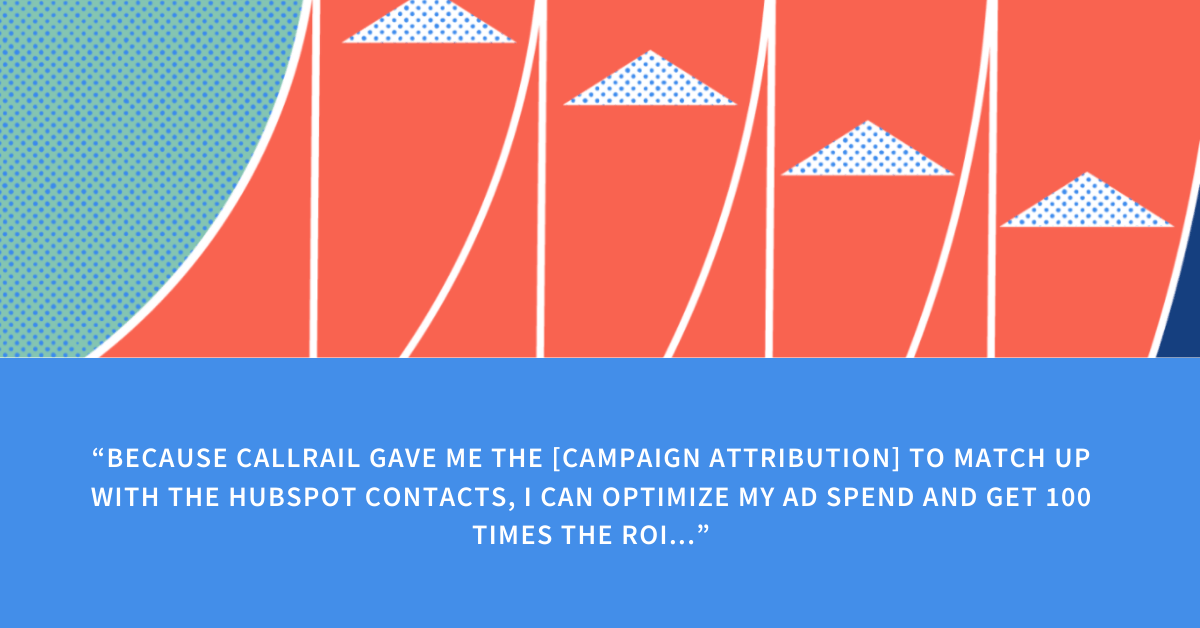 Just two months into the new program based on CallRail’s data and Hubspot’s automation, JC Law’s monthly new retained cases have increased by 61% from historic levels. Historically, the firm would retain 60 new clients or matters a month on rough figures. For June, they retained 97 total matters.

Based on CallRail’s attribution data and Hubspot’s reporting, JC Law has also decided to focus more on organic leads. For JC Law, organic leads regularly convert 17% of the time. (Compare that rate with a total 4% for organic and paid leads combined.)

“In the past, phone calls more often convert to clients than website form fills. Organic lead generation is by far our best way to do this,” explains Ashley. “And the best way to sort through incoming phone calls is through CallRail reports — to make sure we follow up on everyone.”

When Ashley originally imported their original contacts from the old CRM into Hubspot, 47% of the contacts were still considered open. Some of those “open” leads had their original consultation eighteen months ago and had never been followed up with.

Now, a customized automated workflow in Hubspot automatically follows up with every new lead, ensuring that everyone who reaches out is contacted promptly.

“By integrating our CallRail system with Hubspot even through something as basic as the Conversations inbox, I can take this conversation and put them through into the follow-up system,” Ashley explains.

For example, CallRail captures calls to their domestic violence tracking number, even if they don’t leave a message. Just a few seconds is enough to capture vital lead information, such as campaign origin and their contact information. The marketing team makes a point of putting those numbers into the automated drip campaign, since that particular hangup is a safety concern.

Overall, Hubspot’s automation system means that rather than lingering in limbo, the marketing and sales team can now close cold leads to better focus on active ones.

Improved Client Retention and Services with CallRail and Hubspot

If your office is hesitant to add new technology, don’t worry. Ashley explains that Hubspot has been easy for even the most old-school of lawyers. 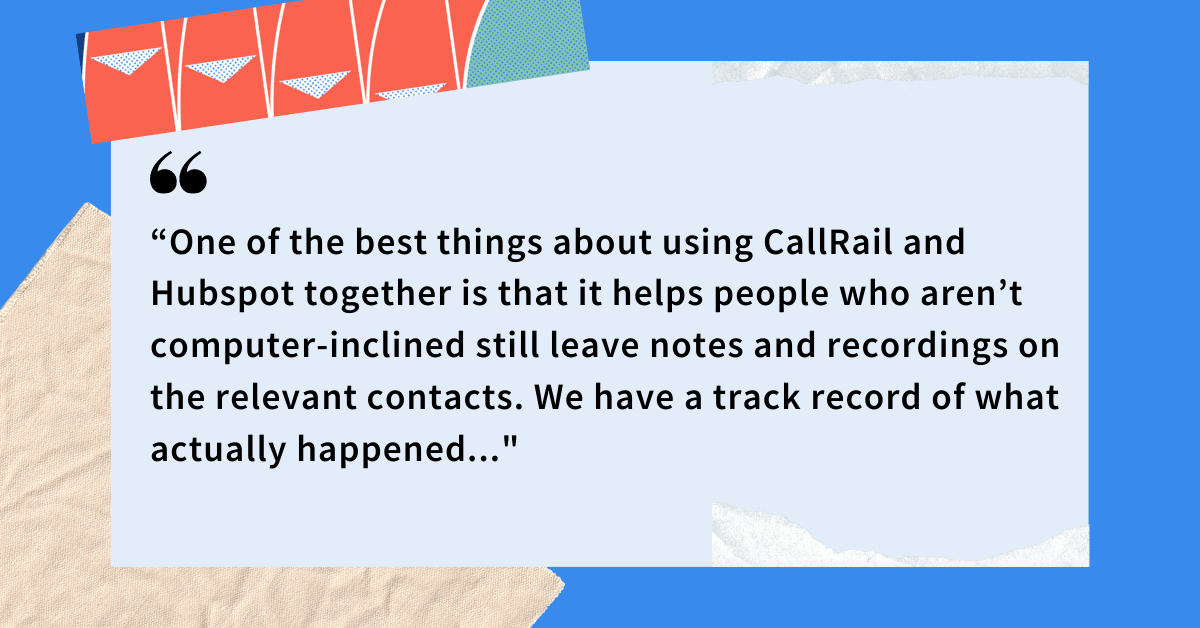 “This way, everyone in the office can know what happened with a new or prospective client, even if someone doesn’t know how to put in Hubspot notes or just forgets to.”

CallRail and Hubspot also serve as training resources. If a client doesn’t retain, then the marketing team knows exactly why based on CallRail Conversation Intelligence, which enables call recordings, transcriptions, and highlights. Conversation Intelligence helps retain new clients, too. Since every caller is entitled to speak to a lawyer as part of their initial consultation, sometimes client notes get messy when business gets busy.

Luckily, the team can go back into the associated recording and prep the person who will be taking the case. This situation usually happens when a second call from a lead arrives, but the associated Hubspot contact has no notes.

Once, a prospective client called into the office to retain JC Law for their matter, telling the sales rep that they had spoken with the firm three weeks prior. However, the only record of the conversation was a single Conversation Intelligence recording on the Hubspot contact, and the attorney with whom the client had spoken was in court and unavailable to clarify.

The office team quickly listened to the recording, rediscovered the client’s case information, and promptly retained them — all with the client being none the wiser. The incident is now shorthand in the office for why Hubspot and CallRail’s Conversation Intelligence recordings are important for everyone to use and reference.

“Everyone internally is skeptical about using their personal cell phone numbers, and I was able to make a masking phone number through CallRail,” Ashley says. “Now, we can keep sending messages to leads and current clients alike, without staff members handing out personal information.”

JC Law is currently in the process of setting up a formal training method to see how calls are handled via CallRail recordings on retained client Hubspot contact records, as well as constant internal training sessions for lawyers and administration alike. This process creates accountability within the system.

In the end, Ashley says, “Hubspot and CallRail are just an easy way to start looking at your numbers.”