With a first-touch attribution model, the very first interaction that a customer has with your company receives 100% of the credit for that sale. It’s an easy-to-understand, quick to set up, single-touch model—but that doesn’t necessarily mean that it’s right for every business out there. 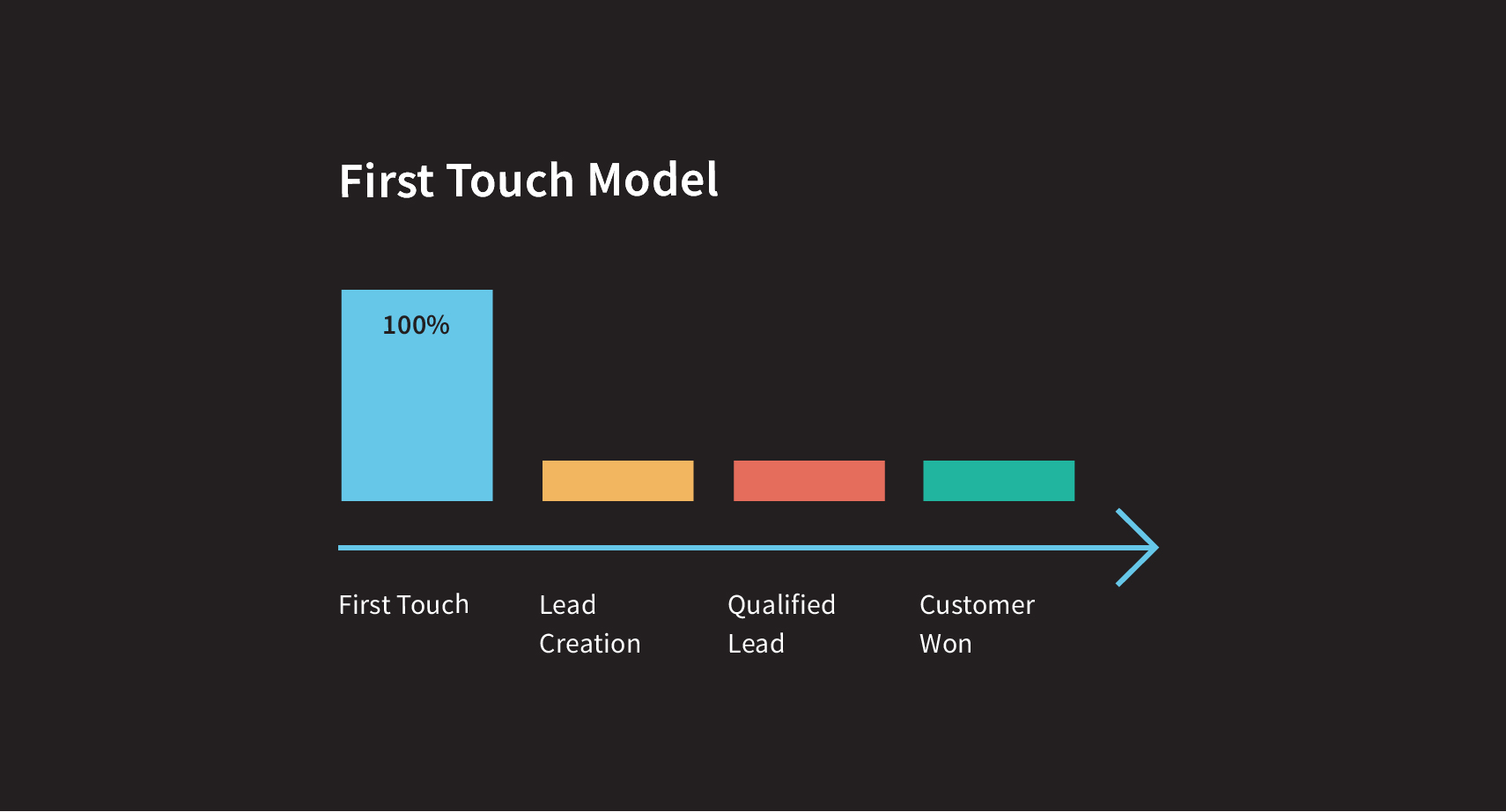 Throughout this piece, we’ll explore why you might use a first-touch attribution model, the potential drawbacks to consider, and which type of organizations can benefit most from first-touch attribution. We’ll also compare it to other similar models, helping you make a considered decision about which is right for your business.

A real-life example of first-touch attribution

Imagine that you work for a luxury used car garage. You’ve recently acquired a rare Shelby Mustang, a true collector’s item. It’s in great condition, hasn’t got many miles on the clock, and will probably fetch a high price—so long as the right buyer sees it. As such, you decide to heavily invest in a wide range of marketing materials promoting the Shelby.

You set up a series of PPC campaigns. You run adverts in classic car magazines. You promote the car in several of your email newsletter campaigns. You post a series of photos on your website, your Instagram page, and your Facebook page. Your CEO even goes on a podcast and talks about this amazing used car. Despite plenty of interest, there are no takers for the first couple of months—given how rare it is, the price is probably putting most people off.

One day, however, a customer rings the garage. She mentions that as she was browsing around one of her favourite sites, she clicked onto their podcast page and listened to the episode featuring your CEO. Inspired by their passion when talking about the Shelby, she looked the car up on Instagram—and she was suitably impressed. So impressed, in fact, that she decided to call up the garage using the podcast page’s unique call tracking number.

She chats away with your head of sales about the car’s history, its specifications, and more, before arranging to come in the following day for a test drive. As planned, she comes in for the test the very next day, and it goes well. She loves the car and is on the verge of buying it there and then. However, given the price, she says that she’s going sleep on it before committing.

A few days later, she calls the garage back and continues her discussion with the head of sales. She’s still very interested but she’s wondering if there’s any wiggle-room on the price. After a long conversation, during which the salesperson convinces the prospect that the price is actually a steal for the model and the quality, she goes ahead and buys the car over the phone before agreeing to pick it up in person the following morning.

If the garage used a first-touch attribution model, 100% of the credit for this sale would go to the very first time that the customer came across the company: the podcast featuring the CEO.

Because of its simplicity, it’s also very quick to set up. So long as you track all touchpoints in the customer journey (or at least know which touchpoint came first), then you’ll be able to use first-touch attribution without any hassle.

Beyond its ease of use and uncomplicated set-up, using a first-touch attribution model can also be incredibly beneficial. Imagine that your marketing team is focused solely on demand generation. By using a first-touch model, you’ll guide future investment into channels that drive initial brand awareness. Over time, this will greatly increase the number of leads you pass over to sales.

This means that your team will be deemed a success, you’ll receive further investment, and you’ll continue to generate a large number of leads. What’s not to love?

Which companies should use a first-touch attribution model?

You should use first-touch attribution if you:

Using a first-touch attribution model makes a lot of sense if your business typically has a short sales cycle. Imagine you sell watches. The vast majority of your customers end up purchasing after one or two touchpoints—for instance, perhaps they click through from Instagram onto your website and buy there and then. In this case, why wouldn’t you use a first-touch attribution model?

But it’s not just companies with short sales cycles that benefit from first-touch attribution. Even if you have a longer sales cycle and a decent conversion rate, but struggle to consistently source enough leads, then this model will guide marketing investment toward top-of-funnel efforts. Over time, this should bring in a higher number of leads and therefore increase your overall number of sales.

Or perhaps you’re a smaller company that lacks in-house data science expertise and doesn’t have a huge budget to spend on a swanky attribution model. If so, there’s nothing wrong with picking a single-touch model like first-touch attribution. Sure, it might not be as detailed and nuanced as multi-touch alternatives, but it costs nothing to use and it’s incredibly simple to understand.

The cons of using a first-touch attribution model

For some companies, the simplicity of first-touch attribution is a blessing. For others, it’s an impediment. Unless the vast majority of your customers convert after only one or two touchpoints, this model will give you an oversimplified view of your marketing efforts.

The first touch is always important—there’s no denying that—but it’s rarely so important as to receive 100% of the credit for any one sale. Let’s take the example above of the Shelby Mustang. While the podcast was a major reason the sale took place, it wasn’t the only reason. Had the buyer not visited the garage in person, gone for the test drive, or spoken at length to the salesperson, then she likely wouldn’t have converted.

If you’re using a first-touch model, you’ll be led to believe that podcast appearances are the be-all and end-all of your marketing strategy. While they might be a useful tool, they’re certainly not the most effective way to sell used cars—so pouring the lion’s share of your marketing revenue into this strategy likely won’t bring any major long-term benefits.

Imagine the following scenario. You spend most of your marketing budget on getting your CEO to appear on podcasts and radio shows. This leads to some sales, and so you continue to do this. After a while, your company does something radical—it closes down its garage. Of course, customers will still be able to come and pick up their cars once they’ve completed the purchase, but there are no in-garage salespeople.

Needless to say, this isn’t a great plan. Had it not been for the salesperson, the Shelby Mustang wouldn’t have been sold—it’s as simple as that. While the podcast appearance made the prospect aware of the car’s existence, it wasn’t the main reason she went ahead with the purchase.

First-touch attribution models overemphasize top-of-funnel efforts to the detriment of middle- and end-of-funnel strategies. Over time, this can lead to having a skewed perception regarding which of your strategies actually are and aren't working.

Last but not least, the first-touch model is highly susceptible to technological limitations, (especially when using Google Analytics). Google Analytics is great, but it only has a 90-day lookback window. This means that if the first touch occurred over 90 days ago, then it’ll no longer be remembered—and so the second, third, or fourth touchpoint will wrongly be classed as the first.

As a result, if you’re using the model to specifically focus on efforts that drive brand awareness, then you might accidentally be wrongly classifying middle-of-funnel strategies in this bracket.

Which companies should avoid using a first-touch attribution model?

You should avoid using a first-touch attribution model if you are:

If you generally have long, complex sales cycles, then not only will a first-touch attribution model potentially not work (what with the 90-day lookback window), but it will also greatly skew your perception of your customers’ buying journeys.

Furthermore, if your company is blessed with a large budget and you’ve been tasked with optimizing your marketing strategy, then you should probably avoid a first-touch model. Overinvestment in top-of-funnel efforts might not pay dividends in the long run. Bringing in a steady stream of customers requires carefully nurturing prospects: guiding them down the funnel with a range of strategies. As a result, it requires far more than simply investing heavily in ensuring brand awareness.

It’s also worth analyzing why you want to optimize your marketing campaign. Where do prospects typically lapse? Is it that you struggle to get enough prospects in the first place, or do people seem interested in your offerings but then end up lapsing?

If it’s the latter, then a first-touch model will do little to remedy this. Instead, you’ll simply continue to invest in top-of-funnel activities instead of optimizing middle- and end-of-funnel strategies critical to converting prospects into customers.

Learn more about the different types of attribution models: